Why in the news?

Recently eastern ghats were in news for the loss of biodiversity due to adverse impacts of climate change on the region and demands from the environmentalists to include it as a UNESCO cultural heritage site.

About the Eastern Ghats::

The Eastern Ghats run parallel to the eastern coastal plains of India. Unlike the Western Ghats, they are discontinuous in nature and is dissected by the rivers that drain into the Bay of Bengal.

Spread across some 75,000 sq. km. from Odisha to southern Tamil Nadu, Eastern Ghats play an important dual role in fostering biodiversity and storing energy in trees. 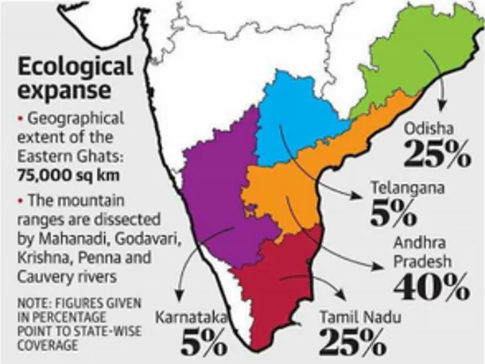 The Eastern Ghats consist of different eco-regions with its range from south to north along the east coast of India.

This diverse landscape is home to endemic flora and fauna including 400 bird species.

Concern About Eastern Ghat and its degrading biodiversity::

The Eastern Ghats face a serious threat from climate change. The area has shrunk by 16% over the past century, and just one region, Papikonda National Park, lost about 650 sq. km. over the last twenty years.

Loss of Biodiversity: a rise in seasonal temperature, causes reduced plant species diversity, and provides a dominant role for herbs over trees.

Loss of Livelihood: Diminished rainfall can negatively affect the productivity of these forests, in terms of their ability to store carbon, and provide subsistence material. The local forest communities are always dependent on forest produce and other forest resources for sustaining their livelihoods, so if forest productivity is affected by climate change then this will directly have an impact on the well-being of the local communities.

Degradation of Biodiversity due to anthropological factors such as

a. Population pressure b. Unsustainable development

Steps to be taken::

The promotion of sustainable use of forest resources should be done to counter overexploitation.

The government should finance the usage of indigenous plants and trees for restoring and strengthening the peripheral areas of the forest of Eastern Ghats by tapping into the International Climate Fund available.

Shifting cultivation must be banned in the area as it directly impacts forest cover.

The demand for the Regional Coordination Committee of States on the Eastern Ghats with a mandate for linking and coordinating activities relating to the Ghats by The Greens’ Alliance for Conservation of Eastern Ghats (GRACE) and the Council for Green Revolution (GCR) must be accepted and expedited.

The region hosts wildlife sanctuaries, biosphere reserves, and Ramsar convention sites. However, a large part of the Eastern Ghats' wilderness is yet to be covered under the conservation umbrella. This must be taken into consideration by the Govt.

Water-energy dynamics broadly regulates plant richness. Plants need an optimum supply of water and conducive temperature ranges. Climate change is the major bottleneck that must be taken into account while preparing the action plan.

Measures must be taken to protect the indigenous and endangered species in the region.

Concerted and macro-level conservation movement by the involvement of all stakeholders especially the public must be started on a war footing.

Collaborating with all individuals and civil society groups will bring much focus and strength to the cause.