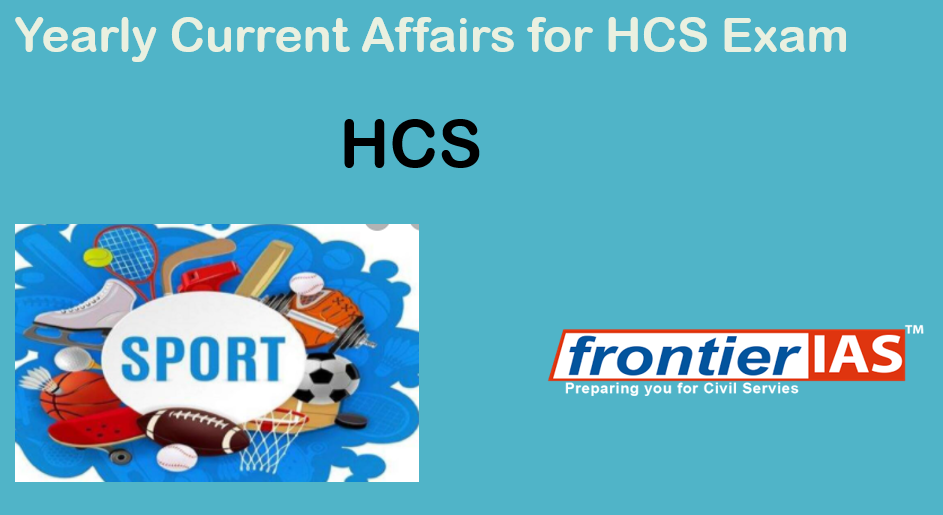 2. Princepal Singh, has signed to play in the NBA G-League, the National Basketball Association’s official minor league, in 2020-21.

3. Indian 4x400m mixed relay team’s silver medal in the 2018 Asian Games has been upgraded to gold.

5. The Youth Olympic Games in Dakar, Senegal will be celebrated in 2026 after Senegal and the International Olympic Committee (IOC) “mutually agreed” to postpone the Games from 2022.

6. The latest edition of the FIFA World Cup will be played for the first time in Qatar.

7. The 22-year-old England football player, Marcus Rashford has become the youngest ever recipient of an honorary degree from The University of Manchester.

9. India’s Grandmaster P Harikrishna finished on top in the Chess960 tournament, part of the 53rd Biel Chess Festival 2020, with 5.5 points from seven rounds.

10. The Hockey India in its Executive Board meeting named Manipur’s Gyanendro Ningombam, who was senior vice-president in the federation, as officiating president till the end of September 2022 after Mohd Mushtaque Ahmad resigned on July 07, 2020.

12. The Indian Olympic Association (IOA) has adopted a new identity, an institutional logo, and a commercial logo as it completes a 100-year milestone of being part of the Olympic games.

13. Indian boxer and World Championship silver medallist Amit Panghal has climbed up the leaderboard to the first spot in the rankings released by the International Boxing Association (AIBA), after a gap of almost 18 months.

14. India’s Nitin Menon has become the youngest ever to be included in the International Cricket Council’s Elite Panel of Umpires for the upcoming 2020-21 season, replacing England’s Nigel Llong.

15. World’s highest Test wicket-taker Muttiah Muralitharan has been named as the Most Valuable Player (MVP) of the 21st Century by the Wisden Cricket Monthly.

18. Weightlifter K. Sanjita Chanu will get the Arjuna award for 2018 after the International Weightlifting Federation(IWF) cleared her doping charges.

20. The World Karate Federation (WKF) has provisionally de-recognized the Karate Association of India with immediate effect for infighting and violating the world body’s statutes during its elections last year.

21. National Champion of India; Niki K Poonacha has been elected as a member of the ITF World Tennis Tour Men’s Panel representing the Asia-Oceania zone.

22. Organizers of the 2022 European Championships have added four sports for the games in Munich.

23. Minerva Academy Football Club has been recommended for this year's Rashtriya Khel Protsahan Puruskar by the Punjab government and Federation of Indian Chambers of Commerce and Industry (FICCI).

24. As part of the 6th International Yoga Day commemorations, the world's first yoga university outside India has been launched in Los Angeles, offering programs that combine scientific principles and modern research approaches to the ancient Indian practice of yoga.

25. Naomi Osaka has been a Grand Slam champion and No. 1 in the WTA rankings and now she's No. 1 on another list: top-earning female athlete.