According to the World Health Organization (WHO), genetically modified (GM) foods are foods derived from organisms whose genetic material (DNA) has been modified in a way that does not occur naturally by mating and/or natural recombination. e.g. Through the introduction of a gene from a different organism.

Currently, plant-based GM food is available, but in the future foods derived from GM microorganisms or GM, animals are likely to be introduced on the market.

GM crops have been developed to improve yield, through the introduction of resistance to plant diseases or of increased tolerance of herbicides.

Bt cotton has been the only GM crop cultivated. In India yet attempts have been made to commercially release Bt Brinjal and transgenic mustard.

The technology behind GM Crops:

The technology is often called “recombinant DNA technology” or “genetic engineering” which allows selected individual genes to be transferred from one organism into another, also between non-related species.

The susceptibility of non-target organisms

The food may cause harm to other organisms.

Pathogens might become resistant to the defensive mechanism of GM crops.

The food could make disease-causing bacteria that are resistant to antibiotics.

The risk to human health: Due to Gene transfer from GM foods to humans, particularly antibiotic-resistant genes may be transferred.

Environmental Concern: The presence of toxins (produced in GM crops) in every part of the plant may reach the soil/water table

Its constitution, criteria adopted for selection of its members, the dominance of bureaucrats, no representation from civil society or states, the possibility of data manipulation as the GEAC is solely dependent on the data provided to them by the technology developer.

Arguments in support and against GM crops

Higher yield, longer shelf life, more nutritious and can be instrumental in achieving food security of the growing population.

GM crops provide an opportunity to bring an “evergreen” revolution that benefits landless, marginal, and small farmers in other corners of India.

We have virtually no testing of GM crops for safety.

In India, as much as 40 percent of the food we produce is wasted.No Need to adopt the technology to increase productivity.

Few scientists claim that the consumption of GM food may result in gastrointestinal tract disorders and cases of allergy.

On the other hand in modern biotechnology, desired genes can be inserted into a non-related individual, so the DNA is recombined.

The regulatory mechanism in India

The two-tier regulatory framework for GM crops includes a Review Committee on Genetic Manipulation (RCGM) under the Department of Biotechnology and the Genetic Engineering Appraisal Committee (GEAC) under the MoEF.

The GEAC considers proposals for trial only after approval from the RCGM, a body comprising scientists well versed with the technology.

GEAC is the apex body in India that is authorized to approve the use of genetically modified crops or organisms in the country.

The Cartagena Protocol on Biosafety came into force in 2003.

It also requires registration of all relevant information with the Biosafety Clearing-House and international mechanism established under the Protocol. 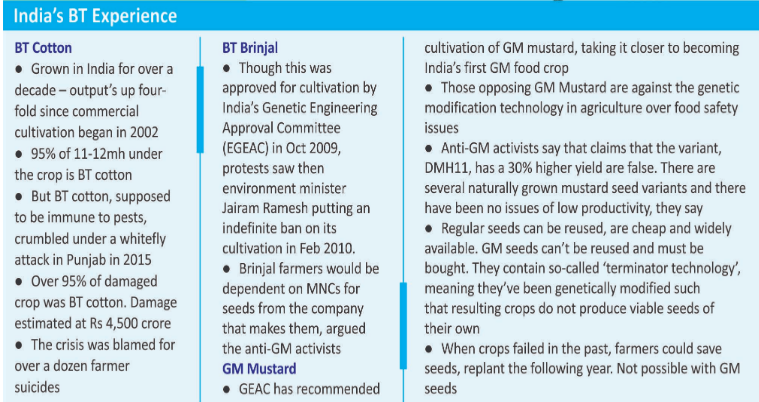 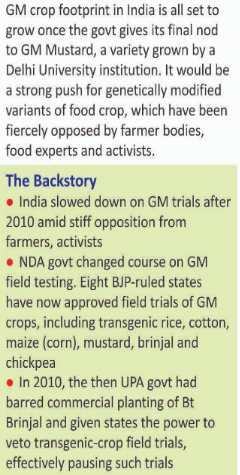